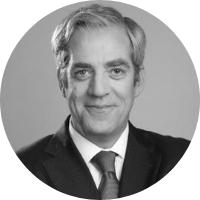 Prior to his current role, Miguel was the Technology Director of AMAP (Africa, Middle East and Asia-Pacific), where he was responsible for overseeing a portfolio of 12 Vodafone Companies, including the Vodacom Group and Safaricom, Vodafone Idea in India, VHA in Australia, as well as Vodafone Egypt, Ghana, Qatar and New Zealand.

From 2014 to 2018 Miguel led the Group Network Operations function, where he consolidated Vodafone European operations in Romania and Portugal NOCs, significantly reducing cost to operate and increasing network stability and reliability.

Before this Miguel held a number of Senior Technology roles within Vodafone. In 2011 he was appointed Group Access Competence Centre Director, where he was responsible for defining the strategy, architecture & standards of Vodafone’s Access networks worldwide, contributing to the launch of 4G in many Vodafone markets.

Miguel holds a PhD degree in Electrical Engineering from the Polytechnic University of Madrid, and has completed his academic background with a Fulbright fellowship in the US.

3:05 pm
The 5G challenge: What new opportunities are there for telcos by deploying intelligent Networks?
Go to session
We use cookies to ensure that we give you the best experience on our website. If you continue to use this site we will assume that you are happy with it.Ok